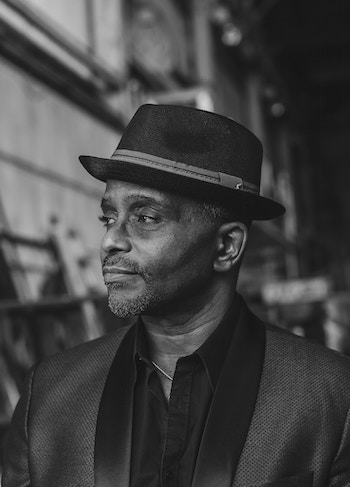 Poet and educator Tyehimba Jess was born Jesse S. Goodwin in Detroit, Michigan. His father was the first vice president of Detroit’s chapter of the NAACP, and his mother founded Wayne County Community College’s nursing program. Jess began writing poetry at 16; just two years later, he won second place for poetry in an NAACP academic competition. After high school, he enrolled at the University of Chicago as an English major before switching to public policy. He left and returned to the school several times before graduating in 1991, working as an organizer, public school teacher, and bookstore clerk and involving himself with local community building. A class on Black poetry of the 60s and 70s at University of Illinois Chicago, taught by poet Sterling Plumpp, drew Jess back into poetry.

After receiving his degree, Jess began seeking out opportunities to perform slam poetry. His poetry performance career reached its peak in 2000 and 2001: he was part of the Green Mill Poetry Slam Team and won an Illinois Arts Council Fellowship in Poetry, a Chicago Sun-Times Poetry Award, and a Gwendolyn Brooks Open Mic Poetry Award. However, in 2001 he decided to put performance poetry aside to begin work on his first book, leadbelly. Published in 2005, the collection delves into the life of blues musician Huddie “Lead Belly” Ledbetter. Varied, competing literary forms are packed shoulder-to-shoulder, woven into a single powerful narrative by Jess’s accomplished rendering of the language of Southern blues. leadbelly was chosen by Brigit Pegeen Kelly for publication sponsorship by the National Poetry Series and named one of the “Best Poetry Books of 2005” by Library Journal and Black Issues Book Review.

Jess completed his MFA at New York University while at work on leadbelly. He continued to receive recognition for his talent, including through Cave Canem, NEA, and Provincetown Fine Arts Work Center fellowships and a Whiting Award. He took on teaching roles, first at Juilliard School, then at the University of Illinois, Urbana-Champaign. Jess began his next book, Olio, after leaving his position at UI, writing the collection over the course of the next seven years. Like leadbelly, Olio explores the world of Black American music-making through a pastiche of styles. However, Olio’s form is still more ambitious, incorporating multidirectional contrapuntal poems, a rigorous structure, and unusual poem shapes that require fold-outs and cut-outs—which Jess’s publisher Wave Books enthusiastically incorporated into the print volume. The harsh historical realities facing the cast of first-generation freed enslaved people that populate Olio are illuminated through primary sources and Jess’s retorts to them, including John Berryman’s minstrelry and Irving Berlin’s casual appropriation. Ragtime pioneer John William “Blind” Boone appears in first-person poems throughout the book, often narrating the relationship between his loss of sight and his musical gift. In “Blind Boone’s Blessings,” his litany of benediction singles out the elements of the surgery that took his eyes, blessing “the fever,” “the flame,” and “the path between lid and bone” that brought about “my deliverance from sight.”

Olio secured Jess his prominent place in contemporary poetry: it won the Pulitzer Prize, among other awards, and was nominated for the National Book Critics Circle Award, the PEN/Jean Stein Book Award, and the Kingsley Tufts Poetry Award. Since publishing Olio, Jess has won a Lannan Literary Award in Poetry and a Guggenheim fellowship. He currently teaches at the College of Staten Island in New York City and serves as Poetry and Fiction Editor of the African American Review.


Video: Jess reads his poem "Mercy" for Poets on Poetry

Text: Jess speaks with The Believer's Jessica Lanay about Olio

What the Wind, Rain, and Thunder Said to Tom