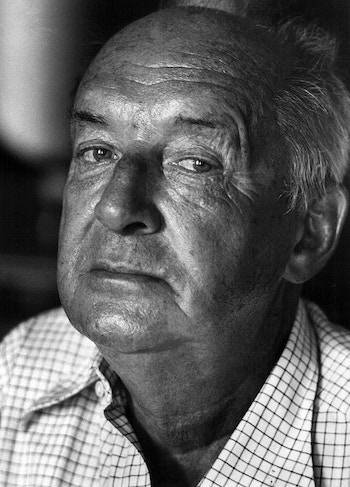 Novelist, poet, and translator Vladimir Vladimirovich Nabokov was born in Russia in 1899, the eldest child of a wealthy and connected noble family. He published two collections of poetry in Russian before his family fled the country due to 1917’s February Revolution. Nabokov received a BA in from the University of Cambridge’s Trinity College, joining his family in Berlin in 1922. He wrote nine Russian-language novels during his 15 years there as part of the flourishing Russian émigré community. He married Véra Slonim, a Russian Jew, in 1925; she would become an integral but largely invisible part of his writing process, serving as editor, typist, agent, researcher, and more. Facing increasing anti-semitism, the Nabokovs left Germany for France, then the United States, taking their young son Dmitri, born in 1934. Once in the U.S., Nabokov taught at Wellesley and Cornell as well as curating lepidoptery at Harvard.

During a summer butterfly expedition, Nabokov wrote his third novel in English, the now-classic Lolita, whose controversial subject matter caused an international furor and brought him to widespread attention. His earnings from Lolita allowed him and Véra to move to Montreux, Switzerland, where he wrote Pale Fire and other celebrated works and hunted butterflies until his death in 1977. Nabokov’s brilliant wordplay, signature allusive technique, and richly intricate plots have earned him a reputation as one of the greatest 20th-century prose stylists and a major influence on writers from the peak of the postmodern era onward.

An Evening of Russian Poetry

The Ballad of Longwood Glen