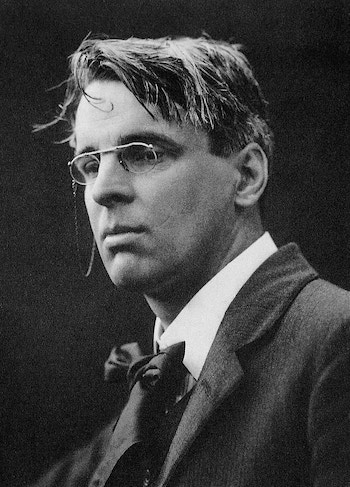 William Butler Yeats was born in Sandymount, Ireland, to an Anglo-Irish Protestant family. He spent his childhood summers at his mother’s family home in the seaside town of Sligo, which would reappear in poems throughout his life. His family moved to London when he was still young, so the poet came of age in the artistic circle of his painter father, John Butler Yeats. A mediocre student, Yeats nonetheless found his way to the works of poets like Percy Bysshe Shelley and Edmund Spenser, which influenced his early writings. He began writing poetry at 17, and his first poems were published by the Dublin University Review in 1885.

Despite spending his formative years primarily in England, Yeats felt a deep kinship with his country of birth and childhood idylls, and his writing frequently drew from Irish folklore and political happenings. Other fertile sources for Yeats included the works of William Blake, the Symbolist and Arts and Crafts movements, and concepts from mysticism. This latter interest was a consistent force in Yeats’ life and poetry: he joined the Hermetic Order of the Golden Dawn and dabbled in other occult groups and studies.

Yeats launched his prolific publishing career in 1889 with The Wanderings of Oisin and Other Poems, the first of dozens of poetry collections and plays to come. That same year, he met and fell in love with Anglo-Irish revolutionary Maud Gonne, who rejected all five of his eventual proposals of marriage but influenced his politics toward Irish nationalism and inspired numerous of his plays and poems. In 1890, he and his friend Ernest Rhys founded the Rhymers’ Club, bringing together male poets of London including Ernest Dowson, Arthur Symons, and many others.

Yeats and his intimates were at the heart of the Irish Literary Revival movement. With his friends Lady Gregory and Edward Martyn, he founded the Irish Literary Theatre in 1899, intended as a home for Irish plays. After its failure, Yeats, Lady Gregory, and J. M. Synge opened the Abbey Theatre in 1904, for which the poet wrote a number of acclaimed plays. This practice as a playwright helped shift his early, heavily embellished poetic style, exemplified by poems like “The Lake Isle of Innisfree,” to a more conversational—and often politically charged—style. He also participated in the creation of the Cuala Press, run by his sisters, which was the only Arts and Crafts press staffed by women. Yeats and Lady Gregory had a rich friendship; Yeats spent much time at her home in County Galway’s Coole Park, a gathering spot for figures in Irish culture, and wrote introductions to her compilations of Irish myths.

At 51, Yeats married 25-year-old Georgie Hyde-Lees, after a final failed proposal to Gonne and another to her daughter. He and his new wife collaborated via her automatic writing, producing Yeats’ book A Vision, and went on to have two children. Yeats’ politics wavered over the years: although he joined the Irish Republican Brotherhood when young, the violence of 1916’s Easter Rising silenced his Irish nationalist sentiments for some time: his famed “Easter, 1916” was not published until 1921. He served as a two-term Senator for the Irish Free State beginning in 1922, before drifting back toward pro-fascist politics, perhaps influenced by his friend Ezra Pound. Yeats received the Nobel Prize for Literature in 1923, which is also considered a nod to the legitimacy of the new Irish Free State by the global community. Today, he is celebrated as a great Irish cultural leader and as one of the major English-language poets of the 20th century.

Learn more about W. B. Yeats

Resource: Learn about Yeats’ family and friends, his life in County Sligo, and more at Yeats Society Sligo

Audio: Discussion of Yeats and Irish Politics with Melvyn Bragg and others at BBC Radio 4

A Prayer for My Daughter

The Host of the Air

The Lake Isle of Innisfree

The Song of Wandering Aengus

When You Are Old