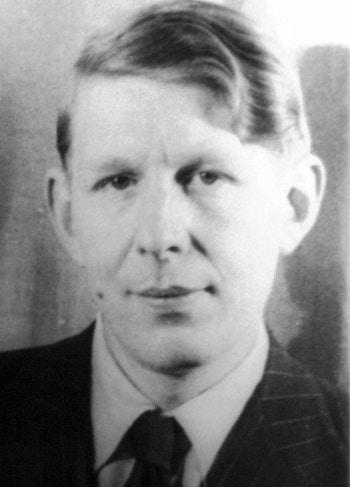 Wystan Hugh Auden was born in York, England, the third son of highly educated upper-middle-class parents. His earliest aspiration was to pursue mining engineering, but by age fifteen, he had determined that his life’s ambition was to become a poet. Auden was granted a biology scholarship to Oxford’s Christ Church college, where he switched his field of study to English. Here, he befriended fellow socially progressive poets Stephen Spender, Louis MacNeice, and Cecil Day-Lewis, later known as the “Auden Group.” He also became better acquainted with the writer Christopher Isherwood, who would become an occasional lover and frequent collaborator. After receiving his degree from Oxford, Auden traveled to Berlin. This was the first of many international trips that helped open his eyes to the complexity of political and social issues: a prescient awareness that contributed to the subtlety and precision with which those subjects are rendered in his work.

Though Auden published with school magazines as early as his teen years, his career as a writer began in earnest in 1930, when his debut collection, Poems, was picked up by T. S. Eliot to be published by Faber and Faber. Auden’s further output in the 1930s included plays, prose, and verse, some with the partnership of Isherwood. During this time, he taught at two boys’ schools before working as a freelance writer and lecturer. In 1935, Auden wed Thomas Mann’s daughter Erika—a marriage of convenience so the younger Mann, a critic of Nazism, could escape the German regime. Auden was well-known throughout his life for such acts of generosity, which he preferred to perform secretly. Ever the student of human nature, Auden habitually sought out new experiences and perspectives: he traveled to Spain, where he witnessed the Spanish Civil War, as well as Iceland, Belgium, China, and the United States. After visiting the U.S., he and Isherwood moved there in 1939.

Auden made New York City his primary home for the next three decades, becoming a naturalized U.S. citizen in 1946. He briefly lived in Brooklyn’s famous “February House,” along with Carson McCullers, Benjamin Britten, Jane and Paul Bowles, and others; a later living arrangement was with his lifelong companion and libretto collaborator, Chester Kallman. Auden made a living through his prose writing, which included over four hundred essays and reviews, and through teaching at colleges including Swarthmore, the University of Michigan, and the New School. His many accolades included the National Medal for Literature, the National Book Award, the Bollingen Prize, the Pulitzer Prize, and an appointment as Professor of Poetry at Oxford. Auden continued to publish poetry until his death in Austria in 1973.

Today, Auden is considered by many to be among the greatest English-language poets of the mid–20th century. His signature wit, technical brilliance, and musical sensibility were in evidence even in his earliest works. He wrote adeptly in a dazzling array of forms, from limericks and comic verse to villanelles and haiku to libretti and plays in verse. His subject matter ranged as widely through human experience, covering social and political affairs, love and loss, and moral and religious subjects. The continued relevance of his poetry in the present day in popular culture and other modern contexts—including renewed attention to his “September 1, 1939” after the September 11 attacks—demonstrates the accessibility and impact of his work for audiences of all eras.

As I Walked Out One Evening

In Memory of W. B. Yeats

O Tell Me the Truth About Love

Song of the Master and Boatswain