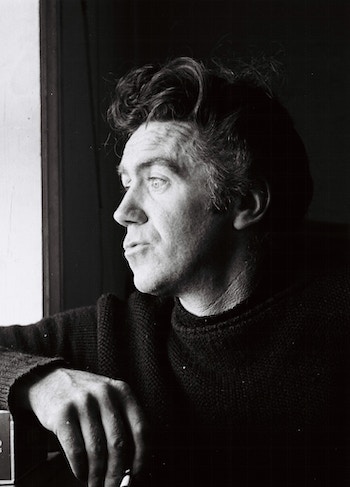 William Sydney Graham was born in a tenement in Greenock, Scotland. The son of a shipyard engineer, he grew up on Scotland’s west coast, whose maritime scenes would often appear in his adult works. Graham apprenticed as a draughtsman to an engineering firm in Clydeside, near Glasgow, at the age of fourteen. He studied structural engineering at Stow College while also attending night classes in philosophy and literature at Glasgow University. After five years, he advanced to the level of journeyman engineer; around this time, he won a bursary to Edinburgh’s Newbattle Abbey College, a residential program for working adults. There, he settled on a career as a poet. During World War II, Graham worked for a time as an engineer in a Clydeside munitions factory, then found piecemeal work across Scotland and Ireland before moving to Cornwall in 1944. He would live in poverty for most of his life, eschewing other work for the sake of his writing.

Graham began publishing poetry in the 1940s, with his first collection, Cage without Grievance, appearing in 1942. His work drew comparisons to that of Dylan Thomas, George Barker, and their group of neo-romantics, also called the New Apocalypse movement. The Seven Journeys (1944), 2ND Poems (1945), and the pamphlet poem The Voyages of Alfred Wallis (1948) all followed. As Graham honed his poetic voice and moved on from Thomas’ direct influence, his work, with its distinctive syntax and emphasis on narrative and place, began to draw more attention. In 1947, he won the Atlantic Award for Literature and received a Rockefeller Grant to lecture at New York University from 1947 to 1948. Enticed by its bustling, bohemian literary scene, he next moved to London, where he met Thomas and T. S. Eliot. Eliot was then the editor for Faber and Faber, and he took on Graham’s next book, The White Threshold, on the publisher’s behalf. Faber would become the home for all of Graham’s subsequent books.

1949’s The White Threshold is considered by critics to be Graham’s first major work, with prominent figures like Edwin Morgan singling it out for praise. His 1955 long poem, The Nightfishing, is now perhaps his most widely celebrated book. Unhappily for Graham, however, the Movement had just come to prominence at the time of its appearance. A British group of poets including Philip Larkin, Kingsley Amis, and Thom Gunn, the Movement critiqued stylistic excess in favor of understatement and traditional forms, taking aim at Thomas, Graham, and the other neo-romantics of the 1940s. Although The Nightfishing featured a successful shedding of Graham’s previous flamboyant wordplay, it flopped with critics and readers. Graham would not produce a new book of poetry for 15 years.

After his time in London, Graham had moved to Madron, Cornwall, where he found kinship with the local circle of St. Ives artists. In 1954, he married his wife, the poet Agnes “Nessie” Kilpatrick Dunsmuir, with whom he had a daughter, Rosalind. He published Malcolm Mooney's Land in 1970 and was granted a Civil List pension of £500 per year in 1974. His final collection, Implements in Their Places (1977), was followed by his Collected Poems 1942–1977 (1979) and the US-published Selected Poems (1980). He died in 1986; his final collection, Aimed at Nobody, appeared posthumously in 1993. Although Graham’s reputation during his lifetime remained modest, his championing by Harold Pinter, Andrew Motion, and others after his death has brought Graham’s distinctive poetry to new, appreciative contemporary audiences, with his New Selected Poems (NYRB, 2018) and the festschrift-cum-collection The Caught Habits of Language (Donut Press, 2018) appearing in recent years.

Text: Eight poems by Graham at the Scottish Poetry Library

Audio: A 1979 reading and discussion by Graham at Warwick Archive

Read by Will Harris