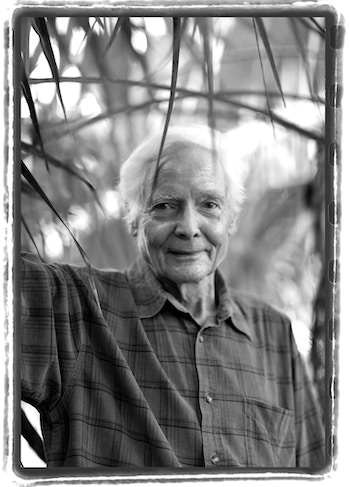 William Stanley Merwin was born in New York City in 1927 and raised in Union City, New Jersey, and Scranton, Pennsylvania. The son of a Presbyterian minister, Merwin wrote his first verse at age five: a hymn inspired by his father’s reading of the King James Bible. He attended Princeton University, where he befriended John Berryman and Galway Kinnell and married his first wife, Dorothy Jeanne Ferry. Upon graduating, he moved to Europe, spending several years traveling, studying Romance languages, and working as a translator and tutor. He divorced Ferry and married Dido Milroy, with whom he lived in London. On Merwin’s return to the United States, he became poet-in-residence at Cambridge’s Poets’ Theatre, and began associating with Robert Lowell and Sylvia Plath’s circle.

Merwin’s first collection, A Mask for Janus, was selected by W. H. Auden as winner of the Yale Younger Poets Prize in 1952. This was merely the first of Merwin’s numerous recognitions over the next seven decades, a list that would grow to include nearly every honor possible for an American poet, including the National Book Award, two Pulitzer Prizes, the Bollingen Prize, the Tanning Prize, the Ruth Lilly Prize, and the Lannan Lifetime Achievement Award. In the 1960s, Merwin moved to New York, divorcing Milroy; in 1976, he moved to Hawaii to study Zen Buddhism. He purchased a former pineapple plantation in Maui and spent many years restoring it to rainforest with his third wife, Paula Schwartz, planting over 500 species of native palm. In 2010, this land became the Merwin Conservancy.

The author of three dozen volumes of poetry, Merwin also translated poetry from nearly a dozen languages, wrote critical works, and was an advocate for anti-war and conservation causes. His poetry evolved with him over time, moving from formal work inspired by classical models to punctuation-free verse centering the line break, and incorporating themes of nature, wonder, myth, memory, and more. A major influence to generations of poets, Merwin died in 2019 at the age of 91.