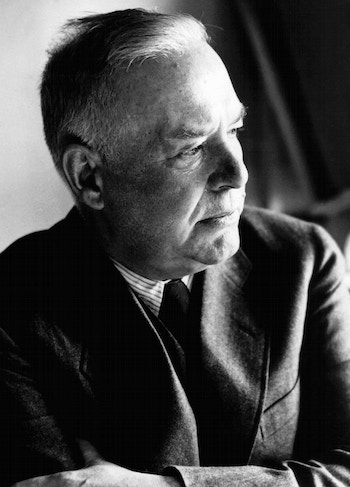 American Modernist poet Wallace Stevens was born in Reading, Pennsylvania, to a well-off Dutch Reformed Church family. His father, a successful lawyer, kept a large library in the house, from which the young Stevens read freely. He attended Harvard as a non-degree student before moving to New York City, where he worked as journalist. He next enrolled in New York Law School, receiving his degree in 1903 and working in law firms for some time. Stevens met Elsie Viola Kachel in 1904 and married her in 1909; the pair would have one daughter, Holly. In 1916, he moved to Hartford, Connecticut, to work at the Hartford Accident and Indemnity Company, where he remained for the rest of his career.

Notable for his unusually late blooming as a poet, Stevens published his first book of poetry, Harmonium, at the age of forty-four. He wrote on and off for the rest of his life, with a second burst of creativity generating four books over the 1930s and 40s, and a final rally resulting in two National Book Award–winning books in the 50s, The Auroras of Autumn and The Collected Poems of Wallace Stevens. His poetry also garnered him the Bollingen Prize for Poetry, the Frost Medal, and the Pulitzer Prize for Poetry. Since the publication of his Collected Poems, Stevens has been considered one of the great American poets of the 20th century, known for his precise language and style, his gift for imagery, and his grappling with broadly abstract topics such as philosophy, meaning, and human imagination. He died in 1955.

The World as Meditation