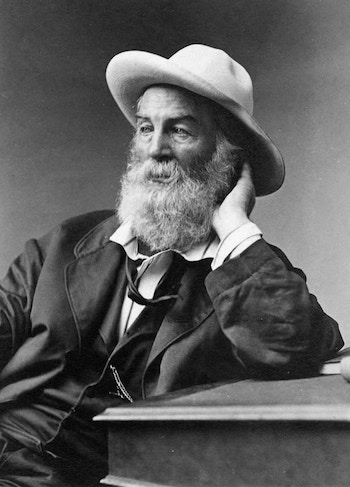 Known as the “Bard of Democracy” and “America’s Poet,” Walt Whitman is one of the great figures of the American poetic tradition. Whitman was born in Long Island, New York, to a working-class family and attended school in Brooklyn. He began working as a printer at the age of twelve, becoming a teacher before embarking on a career in journalism. Whitman founded The Long-Islander and edited several local newspapers, including the famed Brooklyn Daily Eagle. At first, Whitman imitated other poets, but something changed in the years leading up to 1855, when he published the first of many editions of his seminal work Leaves of Grass. Written in groundbreaking and expansive free verse, the volume won praise from the likes of Ralph Waldo Emerson, Henry David Thoreau, and Bronson Alcott.

During the Civil War, Whitman worked in hospitals caring for the wounded, first in New York and then in Washington, D.C. He remained in the capital after the war, serving as a government clerk. Whitman spent the end of his life in Camden, New Jersey, where he died still refining a final seventh edition of Leaves of Grass. Whitman is widely considered to be the first poet to express the American character in his writing, and Leaves of Grass has remained influential to generation after generation of poets.

Song of the Open Road

When I Heard the Learn’d Astronomer