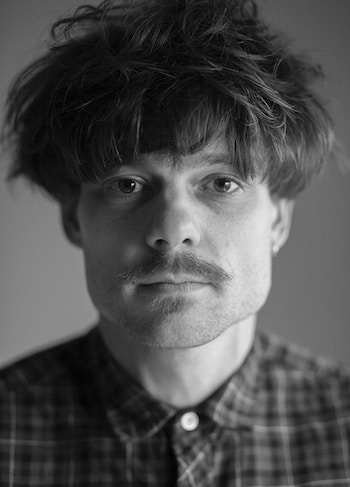 Poet and educator Wayne Holloway-Smith was born in Swindon, Wiltshire, in South West England. His family was working-class: his father worked as a builder and his mother at a grocery store. During Holloway-Smith’s education in Swindon, a historically industrial town, he and his peers were funneled into vocational school and discouraged from higher-level academic pursuits. Not until his early twenties did he encounter contemporary poetry and begin writing on his own. His friends’ enthusiastic support of his work led Holloway-Smith to pursue a university education. After receiving his B.A. at 25, he followed it with a M.A., then finally a Ph.D. in Creative and Critical Writing from Brunel University, in which he examined working-class masculinity as depicted in British literature—the former being a theme he frequently returns to in his creative work.

Holloway-Smith’s first poetry publication was the pamphlet Beloved, in case you’ve been wondering, published by Donut Press in 2011, in which the multiple characters and perspectives the poet often explores are already in evidence. It was his debut full-length collection, Alarum (Bloodaxe Books, 2017), that first brought him attention from the wider poetry world. Alarum was a Poetry Book Society Wildcard Choice for Winter 2017, as well as being shortlisted for both the Roehampton Poetry Prize 2017 and the Seamus Heaney Centre for Poetry Prize for First Full Collection 2018 and longlisted for the 2019 Michael Murphy Memorial Prize, which recognizes a distinctive first book of poetry. “Short,” the final poem in Alarum, won the Geoffrey Dearmer Prize 2016, which was judged by Jane Yeh.

The poet’s second pamphlet, I CAN'T WAIT FOR THE WENDING (Test Centre, 2018), plays with color, chance, and form, taking as its inspiration a misspelling by his young daughter. Holloway-Smith won 2018’s National Poetry Competition with “the posh mums are boxing in the square.” In the poem, Holloway-Smith memorializes tragic aspects of his mother’s life with inseparable wit and emotion—a style typical of the poet, whose unexpected vulnerability hits even harder between laugh-out-loud lines. Another pamphlet, Lasagne, was published by Out-Spoken Press in spring of 2020. Holloway-Smith’s most recent collection, the Poetry Book Society Wild Card Choice Love Minus Love, was released in summer 2020 by Bloodaxe Books.

Currently, Holloway-Smith is a lecturer in Creative Writing in the School of Humanities at the University of Hertfordshire. He has served as co-editor of the online journal Poems in Which, as well as running and performing in live experimental poetry events. His writing has been published in journals and anthologies including Poetry, Poetry London, and Best British Poetry. Holloway-Smith lives in London.

Video: Holloway-Smith reads “the posh mums are boxing in the square”

Text: Read Holloway-Smith’s poem “did you hear the one about the two teenaged boys” at The Believer

from Love Minus Love