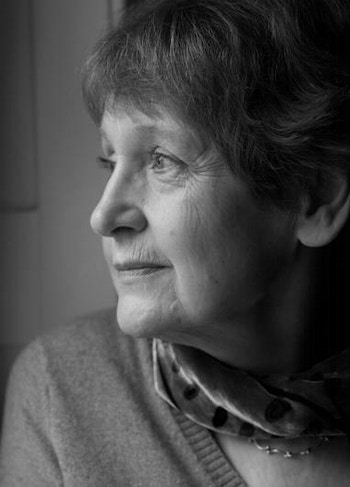 Wendy Cope was born in Erith, Kent, England, the daughter of a department store manager. As a child, she wrote stories and showed an early talent for literature and an ear for writerly detail, aided by parents who read poetry aloud to her. She attended West Lodge Preparatory School and Farrington’s School, then completed her education at St. Hilda’s College, Oxford University, where she studied education and graduated with a B.A. in history. She taught in London primary schools for much of the next fifteen years.

Cope joined the education magazine Contact in 1981, where she worked as Arts and Reviews Editor. In 1986, at the age of 40, she published her first book of poetry, Making Cocoa for Kingsley Amis. An instant hit with English audiences, the collection sold tens of thousands of copies nationally. In 1987, Cope won a Cholmondeley Award, recognizing distinguished poets of the United Kingdom. She began working as a freelance writer, taking on a role as television critic for The Spectator that she held until 1990. She also published two collections of children’s poetry with Faber and Faber during this period.

The poet’s second collection, Serious Concerns, was published in 1991. In the early 90s, she was selected as editor for the first of what would become a substantial list of anthologies, including The Faber Book of Bedtime Stories, The Orchard Book of Funny Poems, and Heaven on Earth: 101 Happy Poems. She was chosen in a 1998 BBC Radio 4 poll as the listeners’ choice for next Poet Laureate, and her 2001 collection If I Don’t Know was shortlisted for the Whitbread Poetry Award. In 2010, Cope was awarded an Order of the British Empire. Her personal archives were sold to the British Library in 2011, encompassing material from juvenilia to teaching career files to manuscripts and adult works, and including the most substantial literary email archive purchased by the Library at the time. 2011 also saw the publication of her collection Family Values, followed by Anecdotal Evidence in 2018.

Cope is widely beloved for her signature droll voice, used to take aim at sacred cows of all types and eras. She subverts the stereotypical frills and elevated language of poetry with what Ted Hughes called a “deadpan fearless sort of way of whacking the nail on the head—when everybody else is trying to hang pictures on it.” Often making use of classic forms like the sonnet, haiku, and villanelle, Cope ventures into both silly and serious topics with an unerring ironic sense, with a range that encompasses parodies of unimpeachable English-canon poets and winking commentary on gender relations and masculinity. A Fellow of the Royal Society of Literature and recipient of a Michael Braude Award for Light Verse from the American Academy of Arts and Letters, Cope lives in Ely, Cambridgeshire, with her husband, the poet Lachlan Mackinnon.

Text: A villanelle by Cope on the subject of writing villanelles

Text: An article by Cope critiquing the institution of the Poet Laureate