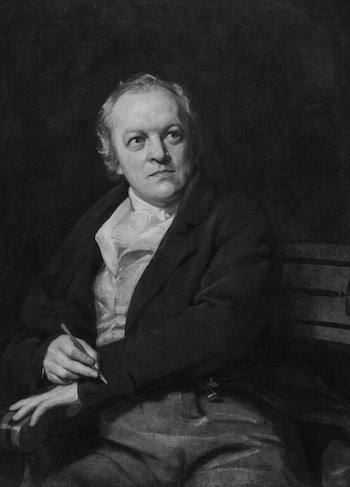 Poet, artist, and seminal proto-Romantic figure William Blake was born in London, one of seven children of a hosier of modest means. His early talent for illustration led his family to enroll him in drawing school at age 10, after which he apprenticed to an engraver. Blake would make a living in that field for the rest of his life, though he often leaned on patrons for financial support. In 1782, he married Catherine Boucher and taught her to read, write, and engrave. The two had no children but maintained a fruitful artistic partnership in which Boucher assisted Blake in creating his own books.

Blake published his first book, Poetical Sketches, in 1783. Soon thereafter, he opened a printshop, which quickly failed. After tending to his favorite brother, Robert, in his final sickness, Blake claimed that Robert’s spirit came to him in a dream to teach him relief etching—a distinctive style of printing pioneered by Blake that gives the effect of illuminated writing. The poet would use it for the famed Songs of Innocence and its sequel, Songs of Experience, as well as many books to follow, fusing his poetry and visual art into a cohesive aesthetic experience beyond the sum of its parts.

Blake was rarely read and even considered insane by some during his lifetime, due to his unorthodox writings, which often depicted his personal mythology, and his relentless questioning of fundamental premises of society, including aspects of Christianity, monarchy, and class power dynamics. However, his works were formative for poets including William Wordsworth, Samuel Taylor Coleridge, and Robert Southey, who would incorporate aspects of Blake’s work in their budding Romantic movement. Blake is now recognized as a true poetic visionary.