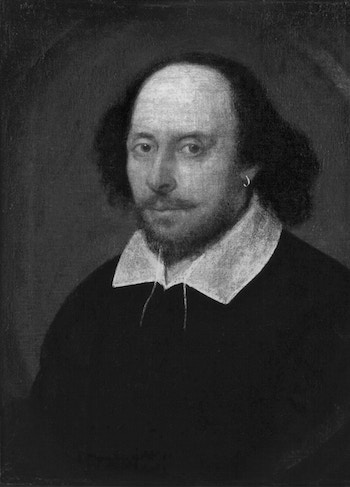 Widely considered to be the greatest playwright of the English language, William Shakespeare was born in 1564 in Stratford-upon-Avon, Warwickshire, England. His father, John Shakespeare, worked as a glover and held local civic roles, while his mother, born Mary Arden, was the daughter of a gentleman farmer with a pedigree reaching back to the Anglo-Saxon period. Shakespeare’s two older sisters died as infants, so he was raised as the eldest of the family. He was likely educated at a local grammar school, where he would have been taught from the classical texts whose references thread his literary output.

At age 18, Shakespeare married the 26-year-old Anne Hathaway: a venture that may have been rushed, as their daughter Susanna arrived just six months later. In 1585, their twins, Hamnet and Judith, were born. The years between the 1585 birth of the twins and Shakespeare’s 1592 appearance in London theater are commonly dubbed his “lost years,” given his almost complete absence from the historical record. Various stories and legends about his life in these years have circulated, but it seems most probable that he was simply apprenticing to learn theatrical work.

From 1592 to 1594, the theaters of London were closed on and off due to the plague, so Shakespeare turned to poetry as an income source. His first of two long narrative poems, Venus and Adonis, was published in 1593, fronted with a dedication to Henry Wriothesley, Earl of Southampton, that sought—and, happily, secured—the lord’s patronage. Venus and Adonis found enduring popularity, going into six editions over the next decade, and Wriothesley continued his patronage for another narrative poem, The Rape of Lucrece. At this time, Shakespeare also began writing his famed sonnets, which he would complete eight years later. Traditionally, this body of work is divided into sonnets 1–126, dedicated to a young gentleman, and sonnets 127–152, written to a “dark lady” both beloved and distrusted by the poet. The Sonnets of Shakespeare, published in 1609, was the first volume to include them all.

In 1594, Shakespeare joined the Lord Chamberlain’s Men, a well-regarded playing company in which he would serve the dual role of playwright and actor: a typical arrangement for theater of the era. He and others from the company purchased the Globe Theatre in 1599, which soon became the most popular playhouse in London. All the while, Shakespeare was turning out plays meant for audiences of the moment that would nevertheless last through the ages. His early output consisted primarily of comedies and histories, including Romeo and Juliet, A Midsummer Night’s Dream, and Richard III. Following this, he transitioned to writing tragedies; Hamlet, Macbeth, Othello, and King Lear are all from this period. His last few years of writing generated romances such as The Tempest and collaborations with other playwrights. All in all, he wrote 39 plays in his 20-odd years of creative activity.

Shakespeare retired sometime after 1612. He and his family lived comfortably in New Place, among the best houses in Stratford-upon-Avon, until his death on April 23rd, 1616. His plays were not published in full until 1623, in what would become known as the First Folio. In the centuries after his death, he was elevated from local celebrity to worldwide fame; today, the “Shakespearean sonnet” he helped popularize is still studied as an essential verse form, and his plays have been performed more than those of any other playwright.

Text: All of Shakespeare's published works, readable for free online