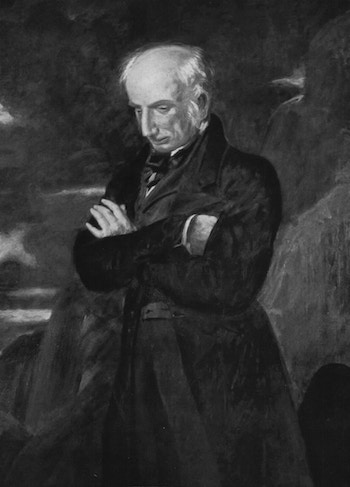 Seminal Romantic poet William Wordsworth was born in 1770 in Cockermouth, Cumbria, England, one of five children of the lawyer John Wordsworth. In his early years, he showed deep interest in both nature and literature, exploring his rural surroundings and memorizing poems at his father’s behest. After the death of Wordsworth’s mother, Ann, when he was eight, he was sent to grammar school; in 1787, he would attend St. John’s College, Cambridge, publishing his debut poem in a magazine that same year. He visited France, then in the throes of the Revolution, upon matriculating, where he fell for radical Republican politics and met a young Frenchwoman, Annette Vallon, who bore his child.

In 1795, Wordsworth reconnected with his sister, Dorothy, and met Samuel Taylor Coleridge, forming the trio apocryphally called “three persons and one soul.” The three traveled, philosophized, and observed the natural world together. During these fruitful years Wordsworth and Coleridge collaborated on the foundational Romantic volume Lyrical Ballads, and Wordsworth began work on his famed Prelude, which would be published after his death. He, Coleridge, Dorothy Wordsworth, and Robert Southey all lived as neighbors for a time in England’s idyllic Lake District, earning them the moniker of the “Lake Poets.” Wordsworth married Mary Hutchinson in 1802, with whom he would have five children. Despite broad criticism of Wordsworth’s innovative works early in his career, he became a preeminent figure of British poetry later in life, with honors including an appointment as Poet Laureate. He died of pleurisy in 1850.

She Dwelt Among the Untrodden Ways