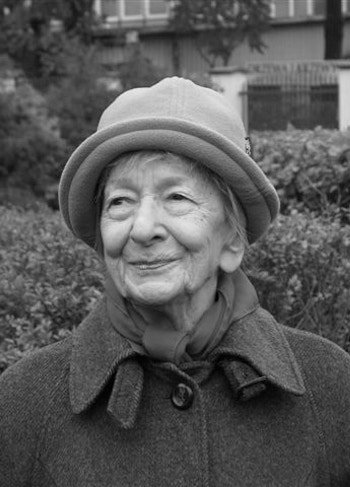 Internationally celebrated poet Maria Wisława Szymborska was born in 1923 in Prowent, now a part of the city of Kórnik, in western Poland. She was the second daughter of Wincenty and Anna Szymborski. Her father was steward to a Polish count, after whose death in 1924 the family moved to Torún. When Szymborska was 8, they moved again to the southern city of Kraków, where she would live until her death. As a child, Szymborska’s literary talent and notable wry humor were already in evidence: her father would reward her with a coin each time she wrote one of her signature witty poems.

During World War II, Szymborska attended underground classes to finish secondary school, a crime by the standards of Poland’s German occupiers. She found work as a railway clerk to avoid deportation. Despite the atmosphere of danger, the years just before the close of the war were artistically fruitful for Szymborska: she illustrated her first book, an English-learning text, and published her first poem, "Szukam słowa" ("Looking for words"), in the just-launched daily newspaper Dziennik Polski. She continued to create visual art throughout her life, including a large-scale collage project in which she crafted postcards for all her friends. Szymborska began attending Jagiellonian University after the war ended, studying Polish literature and then sociology, but was forced to leave before graduating for financial reasons. During her time in school, she introduced herself into Kraków’s writing community, where she met the poet Czesław Miłosz, who became a major influence. Szymborska married the poet Adam Włodek in 1948, to whom she would remain married for six years before an amicable divorce.

In 1953, Szymborska signed onto the literary review magazine Życie Literackie (Literary Life), where she would work for nearly thirty years as a poetry editor, columnist, and reviewer. At this point in her career, Szymborska identified as a Communist, and her first two poetry collections, published in 1952 and 1954, were both written in the Socialist Realist style. By the late 50s, however, she had disavowed both these early politics and her corresponding writings; she formally resigned from the Polish Socialist Party in 1966, and in the 80s, she joined up with the Solidarity movement that helped to bring down the Communist government.

Szymborska’s poetic output was slim but consistent: over her five-decade career, she published fewer than 400 poems in just over 15 collections. Her poems are simple in affect while revealing great depth and pathos. With playful language and ironic distance, she explores moral and philosophical questions from unexpected angles, often using domestic images to shed fresh light on broad historic happenings. For the famously reclusive poet, writing was a deeply personal project, and the worldwide acclaim her work garnered was unexpected and occasionally unwelcome. She won the Nobel Prize for Literature in 1996, making her only the fifth Polish writer to do so. Far from basking in this momentous achievement, she and her friends called it “the Stockholm tragedy,” due to the onslaught of media attention that kept her from the solitude she needed to write.

Szymborska’s many other accolades include the Polish PEN Club prize, the Kościelski Award, the Goethe Prize, and the Herder Prize, as well as the Order of the White Eagle and an honorary doctorate from Adam Mickiewicz University. Many of her books have been translated into English and other languages. Her longtime companion, writer Kornel Filipowicz, died in 1990. Szymborska died of lung cancer in 2012, writing poems until the end.

Text: Five poems of Szymborska’s, selected by the Nobel Library, in English, Polish, and Swedish

Image: Selected collages by Szymborska from an exhibition at MOCAK

Photo by Mariusz Kubik is licensed under CC BY 3.0.