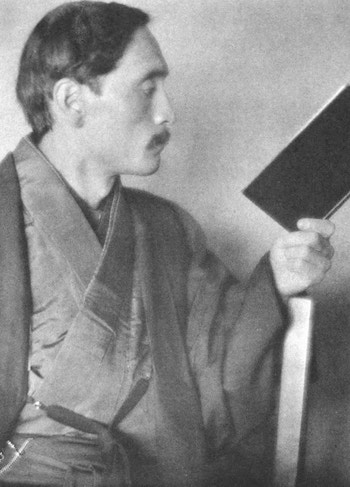 The first Japanese-born author to publish English-language poetry, Yonejirō Noguchi was born in Tsushima, Japan. In 1893, midway through a degree at Keio University, he moved to San Francisco. He worked as a journalist until becoming a live-in handyman for the poet-adventurer Joaquin Miller, who introduced him into the city’s active bohemian community. With Miller’s support, Noguchi transferred his attention to writing, publishing poetry collections, novels, and literary and art criticism prolifically over the next decades and traveling widely as a reader and speaker.

His work was received inconsistently by both the U.S. and Japanese reading public; however, Noguchi’s unconventional free-verse style gained him many influential literary admirers—among them W. B. Yeats, Thomas Hardy, Marianne Moore, and Rabindranath Tagore—and his collection The Pilgrimage was likely a major influence on the Imagist movement of the 1910s. Noguchi maintained a web of romantic entanglements with both men and women, including a short-lived secret marriage to his editor Léonie Gilmour, which produced his son, noted sculptor Isamu Noguchi. He moved back to Japan in 1904 and began writing Japanese-language poetry late in life. Noguchi died in Tokyo in 1947.

To an Unknown Poet