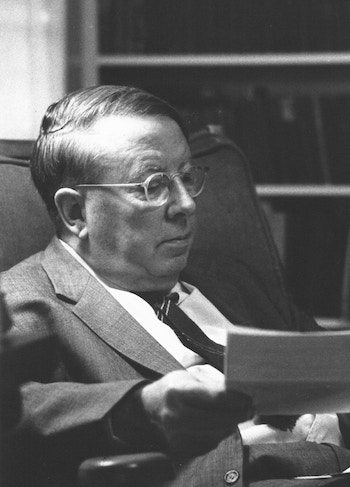 Yvor Winters—poet, critic, and educator—was born and raised in Chicago, Illinois. He spent some of his childhood in then-rural Pasadena, California, with his grandparents. Winters attended the University of Chicago for a few quarters before discovering he had tuberculosis and relocating to New Mexico. He lived in a sanatorium for two years, writing and corresponding with other poets, and published his first poetry books in 1921 based on this output. Winters remained in the state teaching high school until his 1923 enrollment at the University of Colorado, from which he received both an BA and an MA in 1925. He married fellow writer and Chicagoan Janet Lewis in 1926. Winters taught at the University of Idaho in Moscow for two years before attending Stanford University for his PhD, where he stayed on as English department faculty for the rest of his life.

Winters' honors as a writer include a Bollingen Prize and a National Institute of Arts and Letters award as well as grants from the Guggenheim Foundation and the National Endowment for the Arts. Though perhaps better remembered today as a poet, Winters was also a prominent and often controversial critic, whose targets included figures like Wallace Stevens, T. S. Eliot, and Hart Crane. He died in Palo Alto, California, in 1968.

At the San Francisco Airport

By the Road to the Air-Base