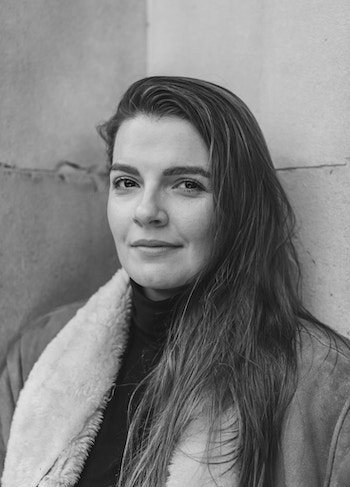 Catherine Dryden was born in County Durham in England and raised by parents Julie and Ian Dryden in Chester-le-Street, a historic Northern market town. She grew up learning Northumbrian folk songs from her beloved grandparents, and she continues to honor that tradition in her adult life, both as a passionate storyteller and singer and as a proud Geordie faithful to her roots.

In 2013, Dryden played the role of Susan Parks in the national UK tour of Lee Hall’s award-winning play The Pitmen Painters. She graduated from the Royal Academy of Dramatic Art with a BA in Acting in 2017. While in training, Dryden worked alongside one of her idols, Juliet Stevenson, as one of the original handmaidens in Robert Icke’s acclaimed production of Mary Stuart at the Almeida Theatre in 2016. After graduating from RADA, Catherine worked with Tippet Rise Art Center, then made her professional radio debut on BBC 4’s World War I radio drama Home Front. In 2018, she began her second UK national tour playing Annie Twiloil in The Play That Goes Wrong for Mischief Theatre, then made her West End theater debut in 2019, continuing the role of Annie at the Duchess Theatre.

Dryden chose to read Nikita Gill’s poem “Love in the Time of Coronavirus” for the Words We Share film series. As she says, “Nikita’s words articulate perfectly all of my emotions, thoughts and feelings towards coronavirus. She captures her response to the world’s pandemic with such beauty and tranquility…Nikita’s words have offered comfort during this time and reminded me that ‘Even in sickness this world is allowed to be beautiful.’”

Love in the Time of Coronavirus