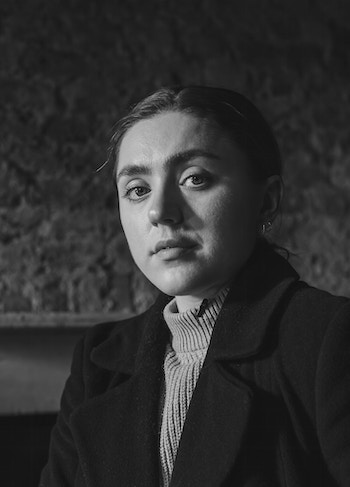 Actress Jensen Gray grew up in a small fishing town by the mouth of the river Tyne in North East England. Raised by a family with strong working-class roots, Gray found support for her early theatrical interests at Live Theatre and Northern Stage before attending the London Academy of Music and Dramatic Art.

Upon graduating from LAMDA, Gray traveled to the US with the Adrian Brinkerhoff Poetry Foundation for a series of poetry films at the Tippet Rise Art Center. Since then, she has continued to work with Brinkerhoff Poetry and has embraced a diverse range of other work in the arts, from appearing on British television shows Emmerdale and Holby City to performances in fringe theatre and absurdism. Gray is passionate about travel, philosophy, and environmentalism and, after converting to the camper van lifestyle during lockdown, is about to embark on her next adventure beginning in the French Alps.

Epitaph for Fire and Flower