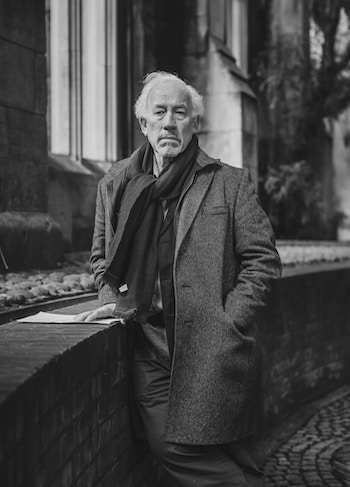 Actor Simon Callow was born in Streatham, London, where he was raised by his mother and grandmothers. He and his mother moved to Zambia—then Northern Rhodesia—when he was nine, and he attended boarding school in South Africa for several years before returning to England. The seeds of his theatrical career were planted when he finished school in 1967: the young Callow wrote a fan letter to Laurence Olivier, who responded with the offer of a job at the famed Old Vic theater’s box office. After this tantalizing encounter with the acting life, Callow attended Queen’s University Belfast for just a year before leaving to enroll at the London Drama Centre. Upon graduating, he joined the Gay Sweatshop theater company and began acquiring bit parts. Callow came into prominence in the late 1970s with the role of Mozart in the premiere of Peter Shaffer’s Amadeus.

Over his long career, Callow has performed many celebrated roles on stage, television, and film. He won widespread public recognition playing Gareth in 1994’s Four Weddings and a Funeral, for which he received a BAFTA nomination. In addition to his acting, Callow has directed plays, films, and operas, as well as recording radio shows and audiobooks. He is also renowned for his writing, including book reviews for major newspapers, various works on Charles Dickens—a personal favorite—and biographies of Oscar Wilde, Charles Laughton, and Orson Welles. Callow came out as gay in his 1984 autobiography, Being an Actor, making him one of the first celebrities to publicly identify as LGBTQ. He lives with his husband, Sebastian Fox.

Callow selected David Gascoyne’s poem “Ecce Homo” as his reading for the Read By film series. As he tells us, “David Gascoyne was an enigmatic figure for me and my generation in the 70s (when I was in my twenties). He had vanished into various sanatoriums in the early 60s. Then suddenly in the late 70s, two volumes of his dazzling youthful Paris Journals appeared, and a personal appearance was announced, fronted by Stephen Spender, who with characteristic generosity shared a programme with Gascoyne. Spender was a good reader of his own work, but when he gave way to Gascoyne, we were all overwhelmed by the force of this frail, emaciated, anguished figure.

“The poem he read was “Ecce Homo,” his masterly and impassioned plea for the wretched of the earth. I knew the poem—it was widely anthologised—but I confess that until I heard David read it, I had not quite got the full personal force of it. As he read, he seemed to be crucified himself. And his Jesus—he was a Catholic—was transfigured before our eyes into the Christ of Revolution and of Poetry. It struck me then and it strikes me now that it is one of the most potent and political poems written in our times in the English language.”