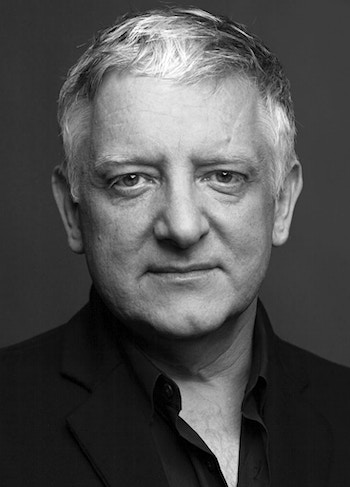 Sir Simon Russell Beale, CBE, was born in Penang, Malaya (now Malaysia), one of the six children of Captain Peter Beale and Julia Beale. His family moved around the world with his father, who was Surgeon General to the British Army, before settling down in England when Beale was eight years old. He became a chorister at St. Paul’s Cathedral School, then received a choral scholarship to Bristol’s Clifton College. Beale intended to go into medicine like his parents, but the rigorous Head of English at Clifton recognized his theatrical talent, encouraging him to prioritize Shakespeare over his chemistry A-levels and casting him as the title role in King Lear. This influence helped open the doors to what became a lifelong passion.

After studying music at Gonville and Caius College, Cambridge, and beginning his work toward a Ph.D. at the Guildhall School of Music, Beale was discovered while performing at the Edinburgh Festival in a student play. Soon thereafter, he was made part of the acclaimed Royal Shakespeare Company, where he worked with director Sam Mendes for the first time and played many major roles. In 1995, Beale became a regular at the National Theatre. His many celebrated performances there have included title roles in Hamlet and Uncle Vanya. Beale’s work on stage has won him multiple Laurence Olivier Awards, as well as the Premio Shakespeare; he is also an accomplished actor in radio, film, and television, with honors including three BAFTA Awards. Beale was made a CBE in 2003 and created a Knight Bachelor in 2019. He is widely considered to be the most accomplished English stage actor of his generation.

A Hymn to God the Father