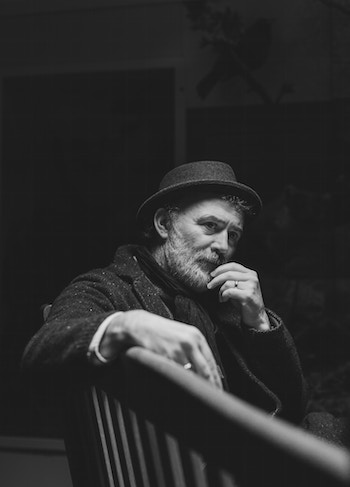 Actor, comedian, and writer Tommy Tiernan was born in 1969 in Carndonagh, Ireland, a small town on Inishowen in County Donegal. He grew up traveling widely with his family, living in Zambia and London before the age of eight. When his family settled down in Navan, County Meath, Tiernan attended St. Patrick’s Classical School, then Garbally College in Ballinasloe. He worked at a carpet factory and as an actor in Galway before beginning his career as a stand-up comedian in the late 1990s. He had three children with former partner Jayme Street; after their separation, he married Yvonne McMahon, with whom he has two.

Tiernan is well-known for his high-intensity, energetic performances, in which he interrogates such grand topics as sex, religion, and family through vivid anecdotes and finely tuned language. On TV, he has appeared in Derry Girls, Dave Allen at Peace (2018), Little Cracker (2012), Love in the 21st Century (1999), Small Potatoes (1999), and Father Ted (1998). His film credits include Dark Lies the Island (2018), Meetings with Ivor (2017), About Adam (2001), Hold Back the Night (1999), The Matchmaker (1997), The Very Stuff (1997), and Angela Mooney Dies Again (1996). Tiernan performs widely at festivals and venues and has appeared on shows such as The Late Late Show and Late Show with David Letterman. His awards include the Channel 4 “So You Think You’re Funny” award, the Perrier Comedy Award, Ireland's Funniest Living Person Award, and others. He currently moonlights as a chat show host, in The Tommy Tiernan Show on RTÉ One, and as a newspaper columnist.

The Echo at Coole