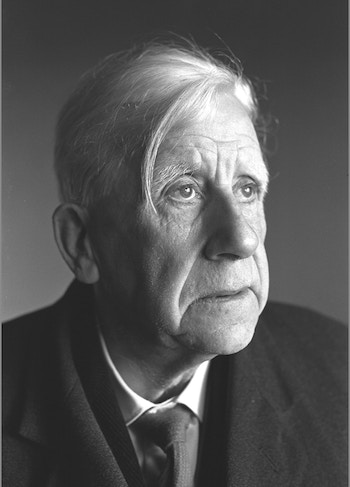 Poet, playwright, novelist, and critic Austin Clarke was born in Stoneybatter, Dublin, in 1896. At age seven, he enrolled in Belvedere College, a Catholic boarding school whose influence is seen in his work’s preoccupation with guilt, sin, and religious themes. He studied at the Rathmines School of Music before attending University College Dublin beginning in 1913. Here, he first encountered the works of W. B. Yeats and, through them, the traditional Gaelic poetry that would shape his poetic style for the rest of his life. He began studying Irish, which he learned well enough to read Gaelic tales in their original language. He also discovered the Abbey Theatre, where he was captivated by plays by Yeats and Augusta, Lady Gregory.

Upon earning his MA with honors in 1917, Clarke published his first book, The Vengeance of Fionn. This long narrative poem, based on a tale from the Fenian cycle, met with great success, going into a rare second edition and winning him friends among the literary elite. He taught at University College for several years until he was forced out due to his civil marriage to playwright Lia Cummins; the union was a failure, and the pair separated. Clarke then moved to England to find stable work, making his living there as a journalist and editor for the next fifteen years. His output included more poetry as well as plays and novels. Some of the latter, which often demonstrated an anticlerical slant, were censored in Ireland for sacrilege, including all three of his novels. However, his talent was recognized by his colleagues, including Yeats and George Bernard Shaw, who asked Clarke to be a charter member of the Irish Academy of Letters at its founding. Clarke moved back to Ireland in 1937 with his second wife, Nora Walker; together, the two would have three children.

From 1938 to 1955, Clarke wrote no poetry. However, he continued to write verse plays, as well as reviewing for the Irish Times, broadcasting regularly on Radio Éireann, and founding the Dublin Verse-Speaking Society and the Lyric Theatre troupe to promote verse drama. Even as he found recognition as one of the leading Irish literary voices of the era—holding the presidencies of both the Irish chapter of P.E.N. and of the Irish Academy of Letters at various times—his plays still frequently found bans in staunchly Catholic Ireland. Clarke’s return to poetry in 1955 saw a new emphasis on satire, with the poet taking up his pen for biting observations on national social issues. His late work Mnemosyne Lay in Dust (1966), a fictionalized account of his nervous breakdown after his father’s death 40 years prior, is thought by many to be among his greatest poetic works. Clarke also wrote two memoirs in his final decades. He died in 1974.

Clarke’s unique contribution to the Irish literary world was his use of traditional Gaelic meters. Taking Yeats and his contemporaries’ reinvokings of classical Irish tales as a starting point, Clarke went deeper, borrowing their complex sonic patterns and rhymes for application in English. Though many poets attempted this technical feat, Clarke did it most successfully, fusing the two traditions to craft poems in English that seamlessly integrate Irish assonance and half rhyme. With Patrick Kavanagh and Louis MacNeice, he is considered to be one of the major Irish poets of the generation succeeding Yeats.

Audio: "Twice Round the Black Church," a 1968 RTÉ profile of Clarke featuring readings by the poet

The Echo at Coole