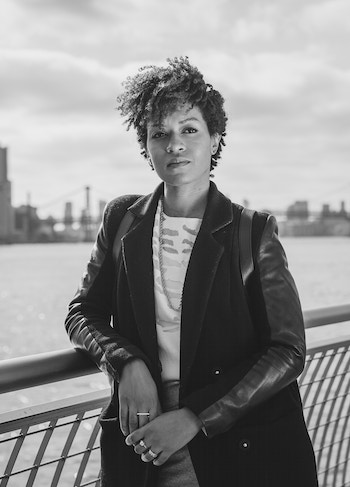 Poet and educator Camille Rankine was born and raised outside of Portland, Oregon. Her parents emigrated from Jamaica to the United States with her older brother a few years before her birth. Growing up as part of a Black Jamaican family in a largely white suburb shaped the young Rankine’s view of the world, informing her later poetry and its invocation of themes of personal history, identity, and belonging. Rankine’s earliest exposure to poetry was from the books in her parents’ collection, as well as her father’s occasional readings of Romantic poetry to his two children. Although neither of her parents worked in creative fields, both loved the arts and literature, and her father pursued photography as a hobby. While young, Rankine preferred music to writing; only during her schooling, with the help of supportive teachers, did she begin to center poetry in her life.

Rankine earned a BA from Harvard University and completed an MFA in creative writing from Columbia University, where she worked with Lucie Brock-Broido and Timothy Donnelly. Her first major success was winning the Boston Review “Discovery” Poetry Prize in 2010—a validation of her work that sparked fresh confidence in the young writer. More accolades quickly followed: that same year, she was noted as an emerging poet by American Poet, and her chapbook Slow Dance with Trip Wire was chosen by Cornelius Eady for the Poetry Society of America’s 2010 New York Chapbook Fellowship. Rankine was then on staff at the Cave Canem Foundation, famously co-founded by Eady; Eady, however, selected the chapbook in a blind reading, only later realizing that the gifted younger poet whose sonically sharp work he’d been immediately drawn to was also his co-worker.

In 2013, Rankine was awarded a MacDowell Colony Fellowship. While in residence there, she began arranging the poems that would make up her first full-length collection: Incorrect Merciful Impulses, published by Copper Canyon Press in 2016. In it, Rankine examines the problems of connection—from individual intimacies to endemic rifts of society and culture—with an agile musicality that easily bridges the collection’s wide-ranging subject matter. Images of nature, disaster, and urban life also proliferate, serving as a landscape to the more human themes in the foreground. Rankine continues her investigation into these topics in “It Would Sound Like a Dream,” a poem published as part of 92Y’s #wordswelivein project. The poem’s speaker is tied by a “tether” to the “mirage” of a city and the mercenary relation it offers (“fig. 1: what can I have...fig 2.: what will it cost me”). The poem sheds light on the intertwined loneliness and romance of urban living, in which the city itself can eclipse the human as object of love.

Rankine is an NEA Fellowship awardee and honorary Cave Canem Fellow and has served as editorial director for The Manhattanville Review and Membership Director for VIDA: Women in Literary Arts. She has taught poetry and creative writing at schools such as Columbia University, Brown University, Hampshire College, and University of Massachusetts Amherst, and she was assistant director of the MFA Program at Manhattanville College. Rankine is currently visiting assistant professor at the New School, and her present-day work for literary advocacy includes roles as Chair of the Board at the Poetry Project and co-chair for the Brooklyn Book Festival’s Poetry Committee. She lives in New York City.

Video: Rankine reads “Little Children, My Apologies” and discusses poetry she admires for Poets on Poetry

A reflection on creative practice

Instructions for the Forest