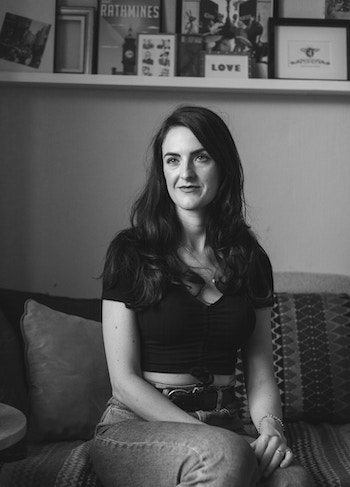 Writer, performer, teacher, and broadcaster Ciara Ní É was born in Clontarf, a suburb of Dublin. Although she spoke English growing up and never attended a Gaelscoil, or Irish-speaking school, her parents sent her to Irish immersion program Coláiste Chamuis in Rossaveel, County Galway, during school summers. There in one of Ireland’s Irish-speaking areas, known collectively as the Gaeltacht, she discovered a passion for the Irish language that would shape her life and career.

Ní É completed her degree in Modern Irish and English at Trinity College, Dublin, in 2013. After graduating, she lived in London for a year, working as an editorial assistant at publisher Dorling Kindersley. However, she missed using her Irish, so she looked for a master’s program to take her study further. In 2015, she completed a master's degree in Irish, the Scríobh agus Cumarsáid na Gaeilge at University College Dublin. While enrolled in the course, Ní É founded REIC, a monthly spoken-word poetry night that features poems, rap, and songs in both Irish and English.

In 2017, Ní É was selected as a Fulbright scholar; she spent the year teaching Irish at the United States’s Villanova University. She was also chosen as a participant in Poetry Ireland's “Introductions” series and began her own YouTube series, “What the Focal!?,” which explores common questions about the Irish language. She partnered with the Irish Writers Centre in 2018 to release a series of four poetry videos. In the same year, she was commissioned to create the video “Seó Beo Pheil na mBan (Phenomenal Woman),” about the Ladies Gaelic Football Association. The video was viewed over 300,000 times, bringing her a new level of recognition. She was chosen as Irish Writers Centre Ambassador in 2019. The Irish Arts Council named her the 2020 Irish-Language Writer-in-Residence for Dublin City University, where her projects included a group choral work designed to be learned and performed online.

Ní É is a regular broadcaster on RTÉ and TG4. Recently, she presented TG4 documentary Life Through Irish / Saol trí Gaeilge, highlighting the new urban Gaeltachts of Northern Ireland. She is a co-founder of Irish-speaking LGBTQ+ arts collective Aerach.Aiteach.Gaelach, which was selected to participate in the Abbey Theatre’s 5x5 development series for theater pieces. Ní É has performed internationally in New York, London, Brussels, and Sweden, as well as across Ireland, and at many festivals. Her work has been published in journals including Aneas, Icarus, and Comhar. She lives in Dublin.

He's Just Not That Into You