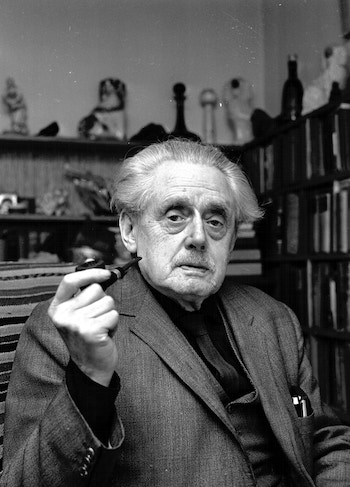 Born in Langholm in southern Scotland, Christopher Murray Grieve—better known by his pseudonym, Hugh MacDiarmid—was a major figure of the Scottish Renaissance. He grew up living over his small town’s library and read widely from its shelves, reportedly using a laundry basket to tote piles of books upstairs to enjoy. After attending Langholm Academy, he taught grade school briefly in Edinburgh, then started work as a journalist for a socialist paper: a career interrupted by his World War I service in the Royal Army Medical Corps. In 1918, MacDiarmid married his first wife, returned to journalism, and began writing poetry. He edited the Northern Numbers anthologies, which collected Scottish poetry and were lauded as harbingers of a new Scottish literature.

MacDiarmid began writing Scots poetry under his pen name in 1922. After a first book in English, Annals of the Five Senses, he published the book-length work A Drunk Man Looks at the Thistle, considered one of the seminal 20th-century long poems to emerge from Scotland. The volume features the use of what MacDiarmid referred to as “synthetic Scots,” which combined multiple Scots dialects into one standardized version. He wrote later poetry and prose in both tongues. A founder of the National Party of Scotland, MacDiarmid was both a communist and Scottish nationalist—two stances seen as mutually antagonistic by his peers. He died in 1978, survived by his second wife and three children and by a legacy of creative and political work for his beloved Scotland.

from A Drunk Man Looks at the Thistle