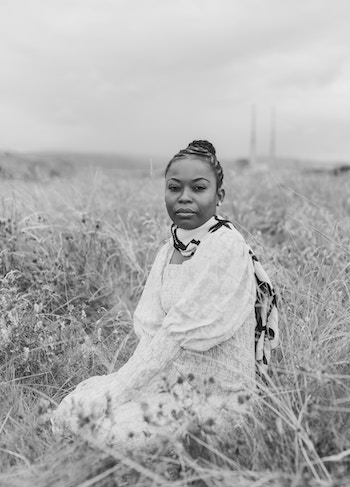 Nithy Kasa was born in Kimpese, a town in the Democratic Republic of Congo, and grew up in the country’s capital, Kinshasa. In 2005, the teenaged Kasa moved to Galway, Ireland, to live with a relative. A poem she submitted to her secondary school’s magazine caught the attention of her English teacher, a renowned Galway poet. Her teacher’s encouragement led to her enrolment in Poetry Ireland’s national Poetry Aloud Competition, where she reached the finals multiple times. More contests followed in poetry and public speaking, and from that point on, writing poetry became a major part of Kasa’s life.

Kasa moved to Dublin in 2011, where she has been based since. Her poem “Unwanted Visitors” appeared in Embers of Words (Migrant Writers and Performing Artists Ireland/Choice Publishing, 2012), an anthology collecting poetry by immigrants to Ireland from a range of countries. Kasa went on to participate in the series “Poetic Lives” for Radio Near FM, featuring six migrant poets discussing their creative output as residents of Ireland. In 2017, she gave talks at the National University of Ireland, Galway, and the Royal Irish Academy as part of the launch of “Language and Migration in Ireland.” Kasa, for whom English is a fourth language, discussed writing poetry in a language that isn’t a mother tongue.

In 2018, Kasa paired with Irish-born poet Ciara Ní É to open the Ó Bhéal series “Make a Connection” for the European Year of Cultural Heritage. She was a guest poet for U.S. college Carlow University's 2019 MFA Residency at Trinity College Dublin and was shortlisted for Red Line Book Festival the same year with the poem “Gathering.”

A member of the Dublin Writers’ Forum since 2014, Kasa has read for Poetry Ireland, RTÉ Radio’s Poetry Programme, Concern, Ranelagh Art Festival, Mother Tongues Festival, and other series and events. She is a contributor to Dedalus Press’s 2019 anthology Writing Home: The ‘New Irish’ Poets, as well as the journals SAH Journal, Flare, and A New Ulster. Kasa’s work can also be found on the Dublin Business School’s archive and the archive of the National University of Ireland, Galway. An administrative worker and entrepreneur, Kasa balances life between Ireland and the DRC and is currently working on her debut poetry collection.

Audio: An interview with Kasa on her poetry, from Near FM’s “Poetic Lives”

The Lake Isle of Innisfree