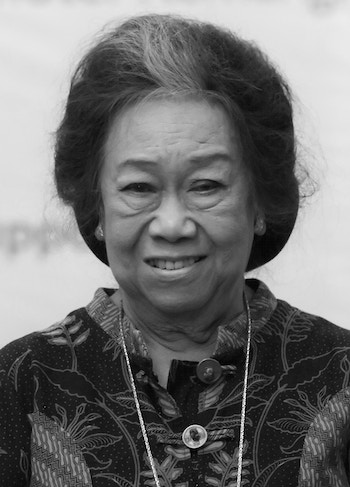 Poet, academic, and activist Toeti Heraty Noerhadi-Roosseno was born in Bandung, Indonesia, in 1933. She was the eldest of six children of Roosseno Soerjohadikoesomo, a renowned engineer and intellectual who held multiple key governmental roles under Indonesia’s first president, Sukarno. Part of a family traditionally devoted to science, Heraty first studied medicine at the University of Indonesia, then moved on to an advanced degree in psychology, writing her thesis on Simone de Beauvoir.

In 1958, Heraty married her husband, Indonesian biologist Eddy Noerhadi; the pair would go on to have four children. She wrote her first poem, a collection of lines channeling female voices, in 1966. Heraty continued her education in the 1970s, earning a bachelor’s degree in philosophy at Leiden University in the Netherlands, followed by a doctorate at the University of Indonesia. Her first collection of poetry, Sajak-Sajak 33 (Poems at 33) was published in 1974, followed by Mimpi dan Pretensi (Dreams and Pretenses) in 1982. Her 2000 book-length poem Calon Arang upends the eponymous witch Calon Arang’s traditional role in Javanese folklore, reclaiming the evil magic-worker as a figure of feminist resistance.

One of the leading lights of modern Indonesian poetry—and by far the most prominent woman in the field—Heraty was a major figure in the wider world of Indonesian academia as well. She co-founded and chaired the University of Indonesia’s Department of Philosophy of the Faculty of Arts, served as dean of the Lembaga Pendidikan Kesenian (Jakarta Institute of the Arts), and taught at both the UI’s Faculty of the Arts and Padjadjaran University’s philosophy department. She founded feminist magazine Jurnal Perempuan, which now offers a scholarship in her name, and co-edited Manifaestasi Puisi Indonesia-Belanda (Indonesian-Dutch Poetry Manifestation). Heraty also edited poetry collections, including Seserpih pinang sepucuk sirih (A Taste of Betel and Lime), an anthology of poetry by women.

As part of Indonesia’s first generation of feminist voices, Heraty wrote poetry that interrogated women’s proscribed roles, using irony to underscore the limited sphere of women within Indonesian society. Heraty was also a passionate crusader for women’s rights: she worked with the female-run nonprofit Suara Ibu Peduli, which seeks to address the financial and social precarity of Indonesian women and children. She died in Jakarta on June 13, 2021.

To the Harbour (Ke Pelabuhan)